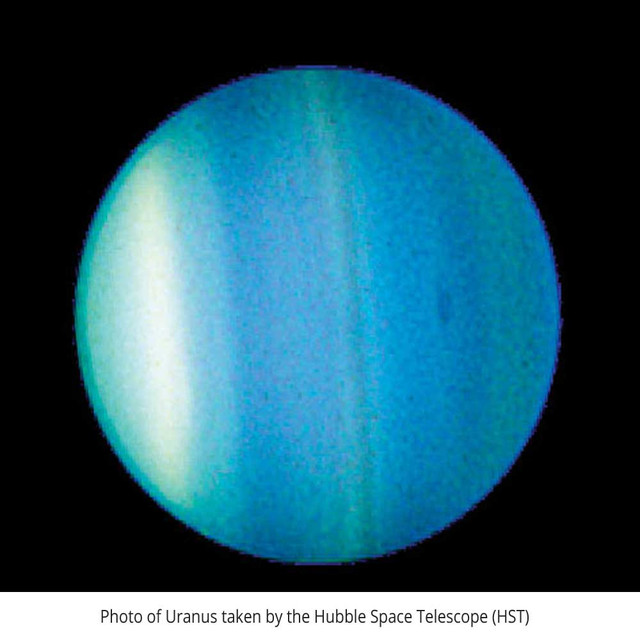 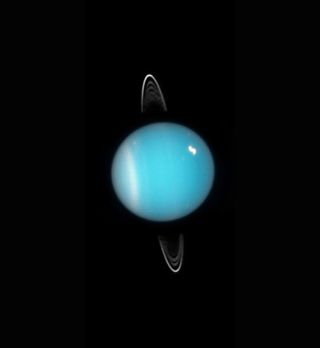 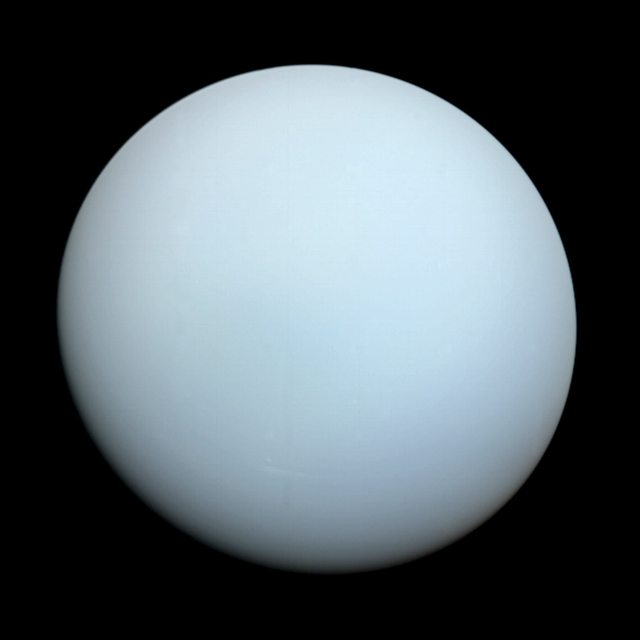 "Uranus is the seventh planet from the Sun. Its name is a reference to the Greek god of the sky, Uranus, who, according to Greek mythology, was the great-grandfather of Ares (Mars), grandfather of Zeus (Jupiter) and father of Cronus (Saturn). It has the third-largest planetary radius and fourth-largest planetary mass in the Solar System. Uranus is similar in composition to Neptune, and both have bulk chemical compositions which differ from that of the larger gas giants Jupiter and Saturn. For this reason, scientists often classify Uranus and Neptune as "ice giants" to distinguish them from the other giant planets.

As with gas giants, ice giants also lack a well defined "solid surface." Uranus's atmosphere is similar to Jupiter's and Saturn's in its primary composition of hydrogen and helium, but it contains more "ices" such as water, ammonia, and methane, along with traces of other hydrocarbons. It has the coldest planetary atmosphere in the Solar System, with a minimum temperature of 49 K (−224 °C; −371 °F), and has a complex, layered cloud structure with water thought to make up the lowest clouds and methane the uppermost layer of clouds. The interior of Uranus is mainly composed of ices and rock.

Like the other giant planets, Uranus has a ring system, a magnetosphere, and numerous moons. The Uranian system has a unique configuration because its axis of rotation is tilted sideways, nearly into the plane of its solar orbit. Its north and south poles, therefore, lie where most other planets have their equators. In 1986, images from Voyager 2 showed Uranus as an almost featureless planet in visible light, without the cloud bands or storms associated with the other giant planets. Voyager 2 remains the only spacecraft to visit the planet. Observations from Earth have shown seasonal change and increased weather activity as Uranus approached its equinox in 2007. Wind speeds can reach 250 metres per second (900 km/h; 560 mph)."

astrological observations of the energy & correspondences of URANUS

In astrology, URANUS is connected to the sign AQUARIUS.

Aquarius is seen as a symbol to represent: rebellion, the transportation of water/emotions/ideas to other people, therefore this sign's energy can seem very cool & detached; they are on the outside looking in, they are the true observer of life, which they then transport & communicate, as they are ruled by the element of air, which connects to the mind, intellect, & communication. this is why aquarius energy can seem very emotionless or even heartless. They are the water BEARER, not necessarily always the source of where the water in the cup originated from. aquarius energy takes from what is already outside & just gives it back or moves it / redirects it to progress humans, for better of humanity, sometimes for justice, sometimes for chaos.

aquarius energy can seem very eccentric. this energy was forced to rebel due to some reasons (mistreatment, abuse, unfairness, discrimination, etc.) & gets so used to defending itself & being different to the point it now loves to surprise & does not care if it shocks others or attracts human judgment. "As it sped away from Venus, NASA's Mariner 10 spacecraft captured this seemingly peaceful view of a planet the size of Earth, wrapped in a dense, global cloud layer. But, contrary to its serene appearance, the clouded globe of Venus is a world of intense heat, crushing atmospheric pressure and clouds of corrosive acid."

Picture: "Venus from Mariner 10." "The surface is completely obscured by clouds."

"Venus is the second planet from the Sun and is named after the Roman goddess of love and beauty. As the brightest natural object in Earth's night sky after the Moon, Venus can cast shadows and can be visible to the naked eye in broad daylight. Venus' orbit is smaller than that of Earth, but its maximal elongation is 47°; thus, it can be seen not only near the Sun in the morning or evening, but also a couple of hours before or after sunrise or sunset, depending on the observer's latitude and on the positions of Venus and the Sun. Most of the time, it can be seen either in the morning or in the evening. At some times, it may even be seen a while in a completely dark sky. Venus orbits the Sun every 224.7 Earth days. It has a synodic day length of 117 Earth days and a sidereal rotation period of 243 Earth days. Consequently, it takes longer to rotate about its axis than any other planet in the Solar System, and does so in the opposite direction to all but Uranus. This means that the Sun rises from its western horizon and sets in its east. Venus does not have any moons, a distinction it shares only with Mercury among the planets in the Solar System.

The third smallest planet in the Solar System, Venus is a terrestrial planet and is sometimes called Earth's "sister planet" because of their similar size, mass, proximity to the Sun, and bulk composition. It is radically different from Earth in other respects. It has the densest atmosphere of the four terrestrial planets, consisting of more than 96% carbon dioxide. The atmospheric pressure at the planet's surface is about 92 times the sea level pressure of Earth, or roughly the pressure at 900 m (3,000 ft) underwater on Earth. Even though Mercury is closer to the Sun, Venus has the hottest surface of any planet in the Solar System, with a mean temperature of 737 K (464 °C; 867 °F). Venus is shrouded by an opaque layer of highly reflective clouds of sulfuric acid, preventing its surface from being seen from space in light. It may have had water oceans in the past,[23][24] but these would have vaporized as the temperature rose under a runaway greenhouse effect.[25] The water has probably photodissociated, and the free hydrogen has been swept into interplanetary space by the solar wind because of the lack of a planetary magnetic field. Because of the lethal surface conditions, the planet is sometimes referred to as Earth's "evil twin".

As one of the brightest objects in the sky, Venus has been a major fixture in human culture for as long as records have existed. It has been made sacred to gods of many cultures and has been a prime inspiration for writers and poets as the "morning star" and "evening star". Venus was the first planet to have its motions plotted across the sky, as early as the second millennium BCE.

Its proximity to Earth has made Venus a prime target for early interplanetary exploration. It was the first planet beyond Earth visited by a spacecraft (Venera 1 in 1961) and the first to be successfully landed on (by Venera 7 in 1970). The planet's thick clouds render observation of its surface impossible in the visible spectrum, and the first detailed maps did not emerge until the arrival of the Magellan orbiter in 1991. Plans have been proposed for rovers or more complex missions, but they are hindered by Venus's hostile surface conditions. The possibility of life on Venus has long been a topic of speculation; in recent years, the topic has received active research." 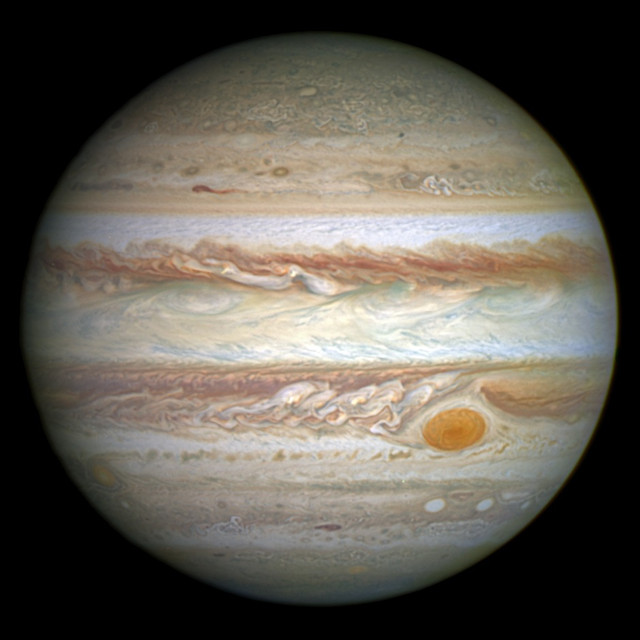 i'm a very curious person, n love to do "experiments", i love to test things out to see if it works or not. i've done this with magick or communicating with angels. "let's see if this works". & in my experience those things did work, which helped me more believe in things such as law of attraction & magick, as well as the existence of angels. so even tho i'm not sure how real astrology really is right now, i still wonder, what if there is some truth to it? to these mysterious ancient beliefs? i definitely have seen some patterns thru astrology time n time again (which i'll explain more further down), but i wonder which system is more better or accurate?

there is many different systems n calculators for astrology. the most popular in the west is the tropical chart system. some of the older systems is sidereal which is more popular in countries like india. plus there are so many different kinds even within sidereal which is why i'll only be studying 3 diff chart systems for now. with tropical & sidereal they are typically both read differently from each other & require completely different knowledges to interpret it. i have found sidereal readings are much more specific which makes it amazing when read by a good sidereal astrologer, which i have been read once from one & found the specifics astonishing. they rlly go more into the past karma side of it. then i even found a third calculator which really interested me as it changed my placements a lot.

for a while i have said, that both tropical & sidereal are accurate, they just read differently & read different things. my opinion has been that tropical seems more about us on a surface level or when we were first brought into this life, like our younger years. the sidereal system seems more about who we should become more like, or who we will transform to.

people say tropical seems more like a self reading and that sidereal is better for predictive means. why that is, i'm not sure. but i'm pretty sure sidereal is very old. still, i'm not one to always say the old system = the right system, because well there's a lot of things in history & in the past that were bad n should be abandoned. still, i still think maybe they all are right but for different purposes. i don't really like how stereotypical old traditional sidereal readings are tho, they can seem a bit sexist sometimes which is why i go against old systems.

still i will try to read all these charts in my own way, the ways i've learned how, & try to see which is most accurate throughout my life, which is for what?

n everyone has different opinions abt astrology too which is ok :) some ppl say they believe tropical is most accurate while others are more strictly sidereal. i'm not here to put down anyone's preferred choice. but i am here to explore these 3 different chart systems when it comes to myself, & try to follow my intuition no matter what ppl say (the third chart here is one most people disagree with as it includes another sign called Ophiuchus. most ppl say Ophiuchus is not a sign etc. & seem to rlly hate the idea of this & get weirdly overly angry about it, which if you study ophiuchus' energy, is very fitting. there is very few people that ive seen who support the idea of ophiuchus, they tend to stay hidden, which again is fitting for the energy of ophiuchus. but while everyone else hates it, i am curious n feel attracted to explore & study it! i want to see which system is really the most true for me? putting aside any other bias even if it's expected to hate the idea of this 13th sign.i want to explore it all with an open mind :)

so let's get into it!

if you're new to astrology, just saying, i'm a sagittarius; this is my sun sign. whatever sign you are due to your birthday, that is your sun sign, which represents: but astrology goes into the other planet placements which depend on your location & time of birth!

this is my tropical birth chart: